×
The central theme of my latest book, Take the bull by the horns, is action creates reaction. That’s exactly what happened the day of its release.It was a wintery 2014 June morning when sunshine coast mayor Mark Jamieson launched  my book to a well attended business breakfast at the newly completed Brightwater Tavern. Overlooking a lake, the aptly named venue was bathed in a warm heavenly glow as the dawn sun reflected across the still water. The mood was perfect, providing me with much needed  courage for what I planned… surprise my guests with the unexpected.To introduce my presentation I decided to play my vintage Fender electric guitar, which had lay in its case for forty years. I had never played my Fender at a business presentation, (why would I, it was totally out of context ) and an amplified instrument at seven in the morning could be pushing boundaries. Although hugely apprehensive, this was my gig, and I had a story to tell and my Fender was integral to its inception. I began by explaining how a song had exploded into my young life, igniting a spark that inspired me to a acquire an American made guitar, which in 1962, cost almost as much as an FJ Holden. Little did I realise that spark would ignite a never ending career in music.

As I nervously reached for my old Fender I announced, “that was over 50 years ago – here is the song – and this is that guitar!” Needless to say, I had everyone’s attention as I thrust the guitar high above my head that would have done Springsteen proud. As the familiar opening chord of Apache  instantly changed the mood of the room, I realised how difficult it was to be a speaker and a musician at the same time. I was completely out of my comfort zone, until my old Fender friend, thrilled to be released from exile, confidently spoke to the room. This surprised me as much as my guests! It wasn’t my speaking presentation that captured the audience attention that morning, it was the voice of my Fender guitar.

Unwittingly, this action triggered a common thread of reaction that set me adrift to go in a new direction. The next few weeks of reviews centred around the sound of my old Fender. People were talking and buying my book, and a journalist from the Brisbane News magazine uncannily wrote how pivotal my guitar had been in my life. I was  photographed with my Fender for the feature story and that image soon became the footprint on an new pathway.

There was something mysterious happening here that I didn’t see coming. I could feel the energy of invisible threads of synchronicity, stitching together something new and exciting, ignited by the spark from my vintage Fender.  Where there’s smoke there’s fire, and what happened next, either by chance or design, was an extraordinary gift of serendipity.

A colleague who attended my launch remarked that my guitar had unexpectedly become the hero of the morning event, and upon reading my book declared  that my Fender was The Unexpected Hero in my life. Suddenly, the law of attraction set in motion, as pieces of a puzzle tumbled together. I could sense the enigma of a new pathway in my life connecting, like metal to a magnet. An outstanding instrument with no used by date, had waited patiently for forty years to be heard, and unwittingly had become the soundtrack to my latest book.

Now, one year on, it has escalated beyond belief. I’ve produced a new live ninety – minute musical, Unexpected Hero where I tell my story and play the songs that influenced it. My Fender however, is unstop-a-bull! I’m exhausted just trying to keep up with that guitar! The bugger has motivated me to record a 15 track instrumental CD of the tunes that inspired our story. It is sounding better than ever …click this link to see video highlights….

Looking back down that long and winding pathway, I realise that age and stage doesn’t really matter. As long as you have something to give there is no finishing line. It’s a never ending story.

Your Unexpected Hero finds you when pathways in life attempt to connect. The conundrum is what to do when your footprint is on that pathway.

Take the bull by the horns
– Latest Book
$25

Limited Offer…
Get both Book and CD for only $30
Watch the Unexpected Hero Concert. Click here 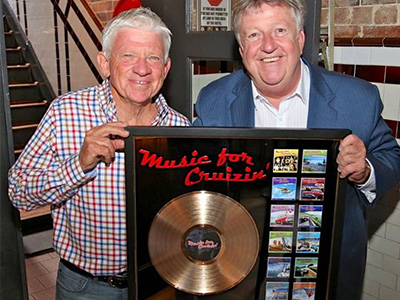